Skip to content
Home » Science for everyone » Big Brother in Space

Hello out there! Today, I want to explain you how satellites work and why we like them so much for polar research. First of all, you may wonder about the relation between the headline and satellites.

Well, satellites fly high above the Earth, around 700 km. And the farther you are away from an area, the larger is the area which you can actually see. Therefore, satellites allow us to monitor far larger regions than we could see with our own eyes. For example, we can observe the entire region north of 70°N at least once a day. This corresponds to more than 1400 million soccer fields. Imagine how many World Cup games you could watch simultaneously…but back to satellites (see an example in Fig. 1).

When we do climate research, we are interested in what happens at large scales, both in space and time. This means we do not care so much about what happens at one point in one moment, but more in what happens in whole regions within 30 years or more. And exactly this is why we like satellites so much in climate science. There is another important point, especially for polar science: Going there is crazily amazing. Unfortunately, it is also crazily expensive (one day on FS Polarstern costs some ten thousand €). It is so much more convenient (though slightly less fancy) to sit in the office and download satellite data… 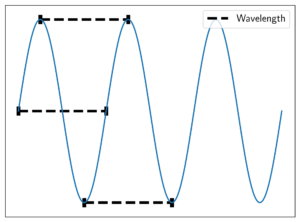 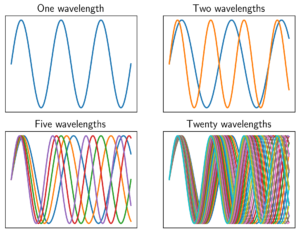 Figure 3: This figure shows up to 20 wavelengths. Now image how radiation with an infinite amount of wavelengths must look like…

So, now we know why satellites are so cool. But how do they actually work? Well, the Earth, like any body, including yours, emits electromagnetic radiation. This may sound abstract, but you can get an idea of it quite easily: Imagine a wave (see Fig. 2). The length between two equal points (marked by the dashed lines) is called wavelength. The electromagnetic radiation comprises waves with an entire range of wavelengths, we call this a wavelength spectrum (Fig. 3). You can even see some of them: The waves with wavelengths between 380 and 750 nanometers (roughly 0.1 percent of a hair’s width, i.e. veeery small) are what we call the visible spectrum as they correspond to the colors which we can see with the human eye. Other waves you can not see, but feel: waves with wavelengths between 1 and 10 micrometers (roughly 1 percent of a hair’s width, i.e. still very small but larger) are what we call thermal radiation. They tell us how warm or cold a surface is. And there is a third type of waves which we use for polar science. They are called microwaves, have little to do with microwave ovens and have wavelengths between 1 millimeter and 30 centimeters (roughly 300 hairs next to each other, i.e. slightly disgusting). They tell us a lot about the properties of the sea ice: How rough is the surface, how much salt is in there, how much snow is on top and a lot more. 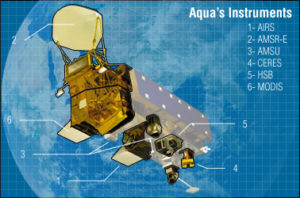 Figure 4: NASA’s Aqua satellite again, but this time with the different instruments it carries. Source: https://en.wikipedia.org/wiki/Aqua_(satellite)

The satellites, or more precisely the instruments they carry, do nothing else than measuring this electromagnetic radiation. A fancy concept called bandpass filtering (don’t worry, I won’t go into details) allows them to collect only those wavelengths they are interested in. Normally, one satellite carries multiple instruments which measure at different wavelengths (Fig. 4). This way, we can get all the information which the different wavelengths tell us at the same time. By the way, using multiple wavelengths to find out where we have how much sea ice is the topic of my PhD thesis. 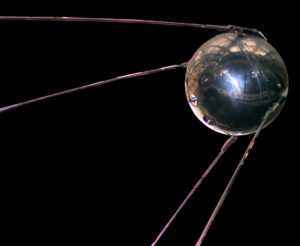 After so much hardcore Physics, let me conclude with some history: The first satellite (Fig. 5) was launched 61 years ago and probably got more public attention than any of its successors…google ‘Sputnik shock’ or ‘Space race’ for more details!