Sea ice is a peculiar subject to study, not only because it is important for the climate and the home of polar bears. It also has funny properties that are related to the French region of Brittany : 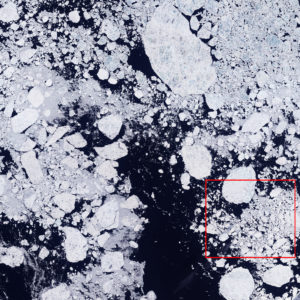 Sea ice photographed from a plane. 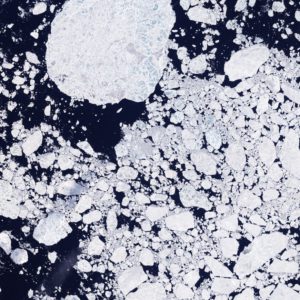 Benoît Mandelbrot, a polish-french-american mathematician, stated in 1967 that coastlines can have a fractal pattern. Increasing the resolution used to measure its length leads to an increase of it. This property comes from the fact that the shape of the coastline is the same at small scale. This is particularly true for the rough coastlines of Brittany, a peninsula in the west of France, also known for its delicious pancakes, or “Crêpes“. 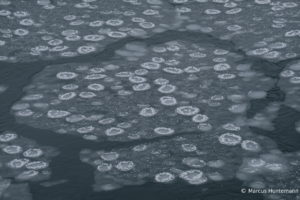 So now you are asking, what is the link between this and sea ice? Well, sea ice has the same property! It has the same shape at a different scale. Take a picture of sea ice from a plane, and then take just a part of this picture and it looks the same! This is shown on the picture to the left, the red square corresponds to the second image.

But that’s not all: there is a type of sea ice which is called pancake ice because of its circular shape, looking like thousands floating crêpes in the Arctic ocean. They are formed by interactions between newly formed sea ice and the waves.

So next time you are eating pancakes or visiting Brittany, think about the sea ice and its unusual properties!

Written in collaboration with Valentin Ludwig.