Skip to content
Home » Science for everyone » Fun with Ice, Take 2/3: Colouring ice cubes from the inside

But enough technical description for now, let’s start with the experiment. Here’s what you need (see also Figure 1): 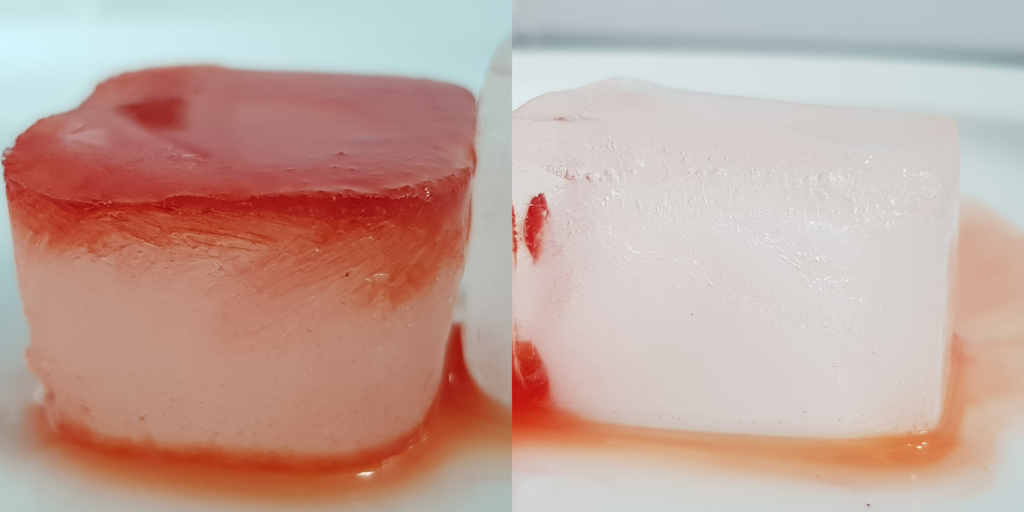 Of course, it’s again the salt that makes the difference… never underestimate a pinch of salt! There are two processes happening here: First, the surface of the salt water ice cube melts faster. This is because salt lowers the freezing point, just like the salt you put on the streets in winter. Therefore, the surface is liquid  and takes up the coloured water, while the surface of the fresh water ice cube is still solid. Then, there is a second effect: As I wrote, most of the salt in the salt water gets ejected when it freezes.

Figure 3: The ice cubes seen from above.

Therefore, you have parts within the salt ice cube with a lot of salt, all the salt which didn’t stay in the ice when it froze. There, you have only a very small amount of liquid water and a lot of salt, so the water has a very high salinity. This water is also called brine. More salt in the water means that it melts the ice around it (remember that salt lowers the freezing point). So, the brine starts to melt down its way through the ice cube, leaving something behind which we scientists call brine channels. These brine channels now take up the coloured water. You can see some of them in Figure 4 if you look carefully. This is why the salt water ice cube takes up the colour and the fresh water ice cube doesn’t.

Figure 4: The salt water ice cube after some time.

Now while it’s pretty cool that you can colour an ice cube from inside, you might still wonder what the scientific relevance of this entire hocus-pocus is. One consequence is that the brine, since it is so saline and very cold, causes a process called convection, which you hopefully remember from the last post. Another consequence is that sea ice (frozen sea water) is much more fragile than lake ice (frozen fresh water), which makes it easier to break apart and move around. Can you think of more? Let us know and if it’s something fancy and we like it, you may even get a reward!

In the next part of the series, we will explain why an iceberg is something different than sea ice, what happens to the sea level if sea ice melts and more fancy things…be prepared!