Skip to content
Home » Science for everyone » What is a model?

If you have any interest in climate sciences, it is very easy to stumble upon the mysterious term climate model sooner or later. However, it is sometimes quite difficult to get answers to questions like: “For what do you actually use a model?” Actually, all anybody normally asks is “So, you press start and then wait for nice figures to pop out of your model, or what do you do?”, but the idea is the same. That is why I would like to give an introduction to my work as a modeller. 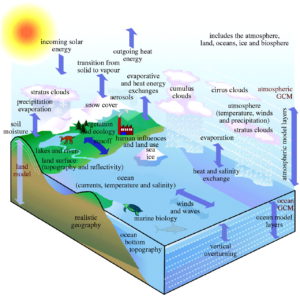 First of all: what do I mean when I use the word model? For me, most often, a model is a computer program that calculates how some part of the world is behaving.  In the case of full climate models, this part can be as large as all the oceans and air masses of the whole world. But a model can as well describe just how a single glacier evolves, or even only how a small block of ice is deforming if you push hard enough. Such a task is met in three steps: (1) We need to have an idea of the physical processes that we try to represent; (2) We try to frame those into a set of mathematical equations, and (3) we write a computerprogram to solve those equations. In practice this means for the example of the sea ice model I am using: The ice melts and freezes, moves around when pushed by the wind or ocean currents and can break when it is pulled apart and build small ridges when it is pushed together (step 1). This behaviour can be formulated as one equation for the motion of the ice (“conservation of momentum” – yeah, physics!) and one equation for the temperature in the ice (step 2). These equations describe the change of the sea ice in a small time step. So if the computer program solves them over and over again, we can see how the ice develops over time (step 3). 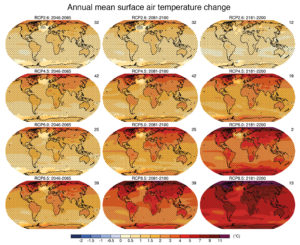 It would be really hard to observe the whole world with different greenhouse gas emissions at different points in the future! (Fig 12.11 from Climate Change 2013: The Physical Science Basis, Cambridge University Press)

Now the big questions are: Why would anyone go through all this work? And, especially once you heard how large the errors in those model still are: Is it not better to simply go there and look directly at whatever the model is reproducing? Well, the answer is: Yes and no. It is always good to have observations of “the real thing” to know what is actually happening – Without observations we would never know if our model results are anything like the reality or not. But models have three huge advantages:
First: When you look at the oceans, for example, there is no technology in the world that lets you look into all those water masses at the same time. All measurements will always either be only at the single point where e.g. a ship sails at this moment or cover a larger region, but only the surface (if made by satellite). With a model, we get the information about all points at all time and can use this knowledge to understand what is happening where we can not look in the real world.
Second: often we want to make experiments to understand the system better. For example: how will the ocean change if the mean air temperature rises by two degrees? Or by three? Or ten? It would be so helpful if we had a few spare earths lying around to test those scenarios in reality, but unfortunately we only have the one we live on. Luckily, in the beautiful model world we can burn as many worlds as we want to!
And third: These equations can be solved quickly, compared to the time those effects take in the real world. So we can not only calculate how the climate changed over the last 50.000 years. We can also do forecasts how the weather will be the next two weeks and how warm and acidic the ocean will be in a hundred years from now. And since knowledge is power, we can use this wisdom about the future to aim for world domination! … Well, maybe not world domination, but it will definitely help us to be better prepared for what is in stock for us.

I could still go on and on about the different parts of climate models, and the different parts of those parts and most important: What is it actually that I am doing all day? And do not worry: I will! But this is a topic to fill another blog entry. For now I hope that you have a better idea for which reasons models are used and useful, and why we can not solve all our problems with observations.