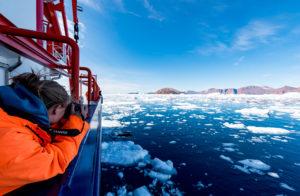 Since my first lecture in marine geology during my bachelor where we learned about expeditions to sea, I knew I wanted to be part of one, one day. So I took a student assistant job, hoping one day my working group would take me on one of their expeditions. But it didn’t happen. At least not during my bachelor. I changed universities for my master, but I knew here I also wouldn’t get the chance to join an expedition. This university only owned a small research vessel, that is normally not making it any further than a few Swedish fjords – which is also amazing but not how I was imagining a real expedition. I should be proven wrong. Half way through my master we had a course with several guest lectures and there it happened, when I expected it the least. Not only did we get to listen to an inspiring lecture about arctic research but in the end we were asked if anyone wanted to join an arctic expedition and write a master thesis about it. There were suddenly so many thoughts in my mind. ‘Of course I’ll do it’, was the first. ‘Was this really happening’, was the second? ‘Was he really asking this question in front of some random master students, he didn’t even know? And what would happen to my other plans about a master thesis about micro plastic that I actually really wanted to write? – Screw it, it doesn’t matter, there will be time for that later.’ This was my opportunity to join a sea going expedition. The chance that I was hoping to get for so long. And it wasn’t just any expedition, it was one to the artic, so what was I even thinking about?!? This discussion in my head only lasted for a few seconds and the next moment I still remember really clear. I rose my hand and looked around in the room, a little nervous because I expected at least half of my class mates to do the same. But no. No one did. But me. And that was it. That was the decision. That was the moment I was waiting for for such a long time. I was going on an arctic expedition!

What followed where a few emails back and forth, some documents to be filled in, some polar clothes to be fitted and three months later I found myself on an Air Greenland flight to Kangerlussuaq, Greenland, where we switched to the smallest passenger air plane I ever flew with and continued our journey to Nuuk to finally board the research vessel. 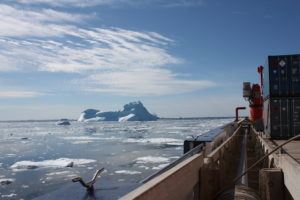 And there I was in the place where I always wanted to be. And it was even more beautiful than I expected it to be. I might not be the person that is actually made for sea going expeditions as my stomach unfortunately does not particularly like ship movement. But well, if you keep on eating, it’s alright and everything else pays off for it. Not only did I generally enjoy being surrounded by the ocean for five weeks and the rough coast line of West Greenland, there is something about the beauty of this area that is hard to put in words. The colour of the water can change within seconds from dark, bleak grey to deep, sparkling blue just because the sun appears from behind the clouds. The cracking sound of sea ice hitting the vessel’s side is a sound as unique and beautiful as the sound when you walk on untouched snow. And icebergs, icebergs are definitely the most amazing and majestic piece of nature I ever saw. They are all different, no two look the same. It is overwhelming to even try and guess how big they can be, especially if you realize that you only see 10 % of it! 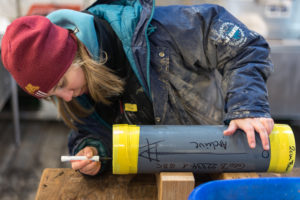 Me, labelling core liners where the collected material (ocean mud or as we say, sediments) is archived inside. (Credit: Volker Diekamp)

Sometimes I could just stand there for a while and watch them pass by, because that really is what they do, they pass by, just like normally other traffic does. But in northern Baffin Bay, they are the only traffic you meet. That was the moment where I fell in love with this area, I knew I wanted to come back, I wanted to work in the area, I wanted to contribute my part to exploring and protecting this unique environment.

This research cruise did not only intensify my passion for the ocean and especially the Arctic, I also learned about ArcTrain as two ArcTrain PhDs joined the cruise as well. I came back home, eagerly wrote my master thesis about my now favorite place on earth and seriously started to think if a PhD would be an option for me. And yes, as you might have guessed, I decided it would be an option. And now I’m here, analysing ocean mud from northern Baffin Bay, trying to find out what it tells us about this special environment’s history – especially related to the development of the Greenland Ice Sheet, the largest fresh water storage we have on the northern hemisphere. Just like J. T. Andrews and S. Funder summarized so well in the beginning of their book (1985):

“Tucked away at the edge of world maps, to most people it is a remote and unknown region. To Quaternary scientists, however, the region is far from obscure; indeed, the wealth of geological, glaciological and paleobotanical material in the area have made the Baffin Bay region one of the most important sources of paleoenvironmental data in the entire Northern Hemispehere.”

But if I wouldn’t have spontaneously said YES to this extraordinary expedition offer on that ordinary day in the lecture hall in Gothenburg, I wouldn’t be where I am right now. Sometimes it really is about being at the right place at the right time and the right time can be any time, when and where you expect it the least…