Skip to content
Home » Getting out there » Polar Bear Protection Training 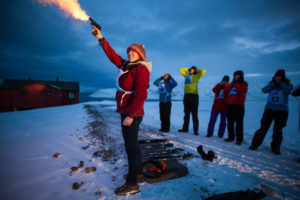 Me shooting a flare gun, during a previous safety training at University Center in Svalbard (credits Ethan Welty)

In a couple of weeks 6 German and 8 Canadian ArcTrain PhD students will join the Floating University, an educational program that will take place on a 6-week scientific cruise to the high Arctic. In preparation for this expedition some of us went to the polar bear protection training. Now you might wonder, why should this be a part of our preparation and protecting animals is not the purpose of science, right? The purpose of the course was not to protect polar bears from poachers, but about protecting ourselves from these carnivores. When staying on a large ship, like the RV Polarstern, one doesn’t have to be afraid of polar bears in the surroundings. But when leaving the ship to do measurements on the sea ice, you could suddenly change into a polar bear meal when not being well prepared and alert. That was what the training was about: How to make sure that neither you nor your colleagues turn into a polar bear meal?

The course had a large emphasis on avoiding a confrontation. The easiest way to avoid a confrontation, is to not enter the habitat of the polar bear. This would mean not going to the Arctic, or at least not leaving the ship. As we wish to do measurements on the sea ice, we will enter the land of the polar bear. The first step in avoiding a confrontation is to constantly be aware of your surroundings. You can do this by first exploring the surroundings and later on, constantly having at least one person that looks out for polar bears, the so called polar bear watch. Once you spot a polar bear, which isn’t very common to happen (e.g. You can live a year in the Arctic without seeing a polar bear.), you should keep an eye on the bear. If the bear is heading in your direction you try if possible to move away from the direction he or she is heading in or leave the area. At the same time you should NEVER forget to pay attention to your surroundings, there can always be another one. When this step turns out to be insufficient, you should try to scare the bear away. You can do this by making noise and shooting a flash-bang, something that looks a little like fireworks, with a flare gun. If that’s not effective and the bear keeps moving closer, than the final step could be to shoot it once it comes too close. When you shoot a  polar bear, you should shoot to kill, to not let the polar bear suffer longer than needed. In addition no one wants an angry polar bear walking around. So shooting isn’t a decision to be taken lightly. We are also well aware that a polar bear is a protected animal and you can go to jail for killing one without a very good reason. Luckily humans are not polar bears favorite dish. I once saw a polar bear passing a tent with people inside. Even though a polar bear has a very well developed sense of smell and can smell seals, their favorite dish, through a layer of ice, it didn’t even turn his head around towards the tents. But things can turn out differently, especially when a polar bear is hungry… 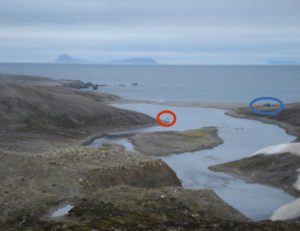 A polar bear that just past a few tents, luckily without showing any interest, straight heading towards, who knows… (credits: Anouk Vlug)

To be allowed to carry a rifle one needs to follow a training. That is how we ended up spending the second day of the training at the military shooting range, shooting on live size children-style drawings of polar bears. To prepare us for the unlikely scenario of having to shoot a polar bear and to learn how to safely handle a weapon.

At first I was a little hesitant about writing this post, because I was afraid about what readers might think about doing research with the risk of having to shoot a polar bear. It is definitely something that could raise ethical questions. When thinking about it I realized it is much worse to hide what we are doing and that is why I wrote this blog. I hope this post gave you a better insight about how we deal with polar bears. Some people say “everything for science”, but I don’t and my life is far across that boundary. If you have questions or comments, please feel free to write them down below. (More information can be found at: http://kho.unis.no/doc/Polar_bears_Svalbard.pdf) For now I keep my fingers crossed that we won’t see a polar bear, while being on the sea ice.