Skip to content
Home » Getting out there » From the Tropics to the Arctic: an Eternal Story!

“Why the hell did you come here???” I often hear for 11 years. Yes. Why did I leave Martinique, a tropical French island with a minimal winter temperature of 20°C … to go to Rimouski (Québec, Canada) where it is snowing 5 months a year with a mean winter temperature of about -15°C? Well, I think it was one of my best moves ever. 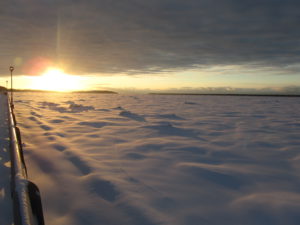 Before coming to Rimouski at 18 years old to do a Cégep (kind of post-secondary studies preceding university, existing only in Québec country) in natural sciences, I had never seen snow in my life. Of course, because it is between 26°C and 35°C 365 days per year in Martinique!! With 90% of humidity, don’t even try to do your jogging at 2 pm there. So, I was happy to finally discover this famous white stuff that can paralyse Paris with a thickness of only 3 cm! But for my first winter in Rimouski, we got about 4 meters of snow at all! It is amazing how that can change the city landscape. And what about the St. Lawrence Estuary just in front of the city? A long island is located 2 km offshore the city, blocking the waves and allow the water to freeze enough for walking, ice-fishing or snow-kiting on the ice covered by snow.

It is also a good choice to live in Québec country, and even more in Rimouski, if you like seasonal changes. Because the weather is just crazy here: In winter the temperature can go down to -35°C sometimes and, in summer, temperatures are above 20°C during the day, but can reach 35°C during heat waves. And this is accentuated to -45°C and +45°C respectively if you take into account the effects of wind in winter and humidity in summer. An amplitude of 90°C through the year… So that’s why you need a bigger wardrobe here. And you can have a drop of 25°C in only one day in winter! This is just crazy, but I love this country.

10 years later, I am still not tired of that, and I am now doing my PhD at the Université du Québec à Rimouski (UQAR) since January 2017 with Guillaume St-Onge, who was already supervising my master thesis. I work on sedimentary processes occurring on the continental margin of Québec and Labrador throughout the Holocene deglaciation. What is funny is that Guillaume gave me the choice between two subjects: this one about the Arctic (and subarctic) and another one… in the Caribbean! Exactly where I spent my young years (pure coincidence). This other project was about the effects of seismically triggered turbidites on the paleomagnetic signal in sediment cores. I did not hesitate too much as I really wanted to work in the Arctic, and it was also the occasion to be part of ArcTrain and meet other people working on this famous remote area. 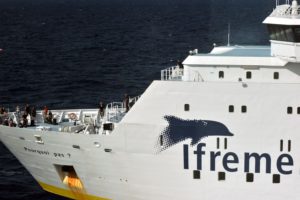 Despite my choice, I had the chance to go on research cruises in both parts of the world. In summer 2016, we were a few from Rimouski who were part of a 6 weeks cruise that sampled the cores for the Caribbean project, on the French research vessel Pourquoi Pas ? (meaning “Why not?” in French). As my father is an airplane pilot for maritime customs there, he had the opportunity to make a quick detour and fly over and near the ship. The ship commandant was a little stressed by the fact that an airplane flew 50 m from the boat, but this was a chance to get new pictures of the ship from the sky, and for free (it even made it to the ArcTrain calendar!).

Moreover, last year, I had the chance to be part of the MSM66 cruise in Baffin Bay, where I met some other ArcTrain students onboard R/V Maria S. Merian. Icebergs everyday, midnight sun, sea-ice and gorgeous landscapes in fjords… Unlike in the Caribbean, there is not so much people who have the opportunity to visit such a remote area, or you have to spend a lot to go on a cruise on a disgraceful floating building. Finally, and because I did not mention that yet (what? Is this possible?), my choices to study the arctic more than the tropical countries are also motivated by an interest about climate change and by the possibility to see the evolution of their impacts in the northern areas through a human life, even if you can rarely sunbathe on the front-deck during breaks!