Skip to content
Home » Getting out there » A northern visit

Map of Canada with the trip from Montréal to Inuvik

When I told my friends, colleagues, people I met randomly at the airport just the time to exchange few friendly lines that I was going to the north of the Northwest Territories, their reactions were about the same: ” Ohh but it’s going to be cold up there!”, “I hope you brought warm clothes!”, “Haven’t you had enough of winter?”. It was ironic that when I arrived in Inuvik (after 2 days of travelling and 4 flights), the thermometer was showing a not so dramatic -14°C while it had been actually -30°C the previous night in Edmonton. However, when the strong cold wind blew without having previously crossed any trees or hills in this beautiful flat land, I learned quite quickly that -14°C was just a number and that the North makes its own rules. Hopefully, the sun far in the horizon, reminding me that I was closer to one of the Earth’s poles, warmed my face, but also blinded me because of all the sun’s rays reflected off the thousand small mirrors hidden in the snow.

Here, the rhythm of life is different, no need to make an appointment or reservation in advance, one phone call on the same day or showing up at the office directly is way more efficient. In 2 hours of walking around the city of Inuvik and visiting Parks Canada’s office or another institution’s offices, I got more things done and more questions answered than within months of sending emails. 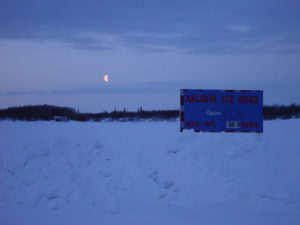 A sign indicating the beginning of the ice road from Aklavik to Inuvik, taken in the early morning

While the sky was turning to red, I took the occasion to have a closer look at the Richardson Mountains from the ice road. While my eyes were busy with the view, the smell of gas from the snow machines was tickling my nose and I could hear the loud barking dogs from the city at the same time, but I think in a way they all blended perfectly in this what we could call a real 3D experience.