On August 26th 2014 I was standing on the geographical North Pole – how the hell did I end up there? 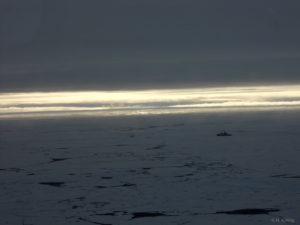 Polarstern in the width of the Arctic         Ocean

Even if I tend to choose rather unusual holiday destinations, not always sunny and warm, the North Pole wasn’t on my travel-to-do-list – totally out of reach, who is going to the North Pole anyway?
That changed drastically since I started my PhD at AWI.

I did my Masters in Marine Geoscience in Kiel, Germany, and during my master thesis and my work as a student assistant at the Geomar I developed a strong enthusiasm for the reconstruction of past climates. Somehow I wasn’t done with that topic after I handed in my thesis, so I applied for PhD positions… and I was invited to an, what came out to be very successful, interview at AWI.
During the interview I was warned that the job would come with a ten-week long expedition – but no one informed me about the stop at the North Pole back then.
During my time as a student assistant I had been on some expeditions to the Arctic before but 10 weeks on a research icebreaker, 10 weeks without any land in sight, 10 weeks with ca. 100 people on confined space – I was dreading that but in the same time I was dying of anticipation.

Sunny times in the ice and wavy pancake ice

An expedition isn’t exactly a holiday but a nice change to all-day lab work and office routine. As for my expedition to the North Pole in particular, this change meant working like crazy in the Geo-Lab as well as taking and processing sediment samples from the ocean floor. The latter required dividing deep sea mud (which often smells like rotten eggs) into nice and small portions – one spoon full of the highly valuable mud for each scientist. Most of the time, I had an exceptional view while working – one day it was bright sunshine and pack ice, the other day it was pancake ice and waves. 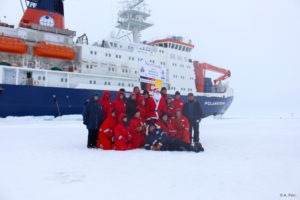 Polarstern and Scientist meeting someone important at the North Pole

After several weeks of hard work and little sleep we had a new course: “North Pole!”. For a short time it was unclear whether we could reach the North Pole, the thick pack ice was too thick, even for Polarstern. But in the end we made it, the gangway was lowered to the ice and after four weeks I could leave the ship for the first time … and stood on the geographical North Pole. After all this hard work every member of the crew and scientific party, enjoyed this little trip with a warm drink and a small football game on the ice.