Tuesday, March 28th 2017, 11:20 am. University of Bremen, building ‘NW1’, in front of room S1270. Around 40 people witness a historic metamorphosis: The first ArcTrain student is converted into an alumnus, meaning that he successfully defended his PhD thesis! 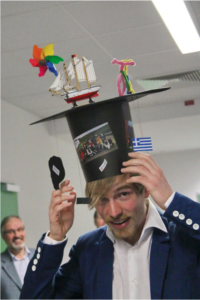 The title of Georg’s presentation was ‘On the Generation of Near-Inertial Internal Gravity Waves by Wind’. In short, he investigated how wind energy is transported into the ocean. His 30-minutes talk was followed by various questions from his examining committee and the audience. Despite covering a multitude of aspects, none of the questions seemed to be a serious problem for him. My personal highlight was the audience’s spontaneous applause when he remembered the name ‘Ekman transport’ after fighting for it for two minutes.

The reward for three and a half successfully finished years (apart from ever-lasting glory and reputation) was a classical PhD hat including a pipe-cleaner bike and a battery-driven ventilator. To sweeten him every future sip of coffee, we ArcTrain students gave him a mug with photos of all of us. ArcTrain speaker Prof. Michal Kucera said cordial words thanking Georg for all his commitment during the last three and a half years, not least for his highly motivated work as a student representative. But having praised him now in 1180 characters, we thought it would be appropriate to include a statement of the brand-new ArcTrain alumnus:

“The day of my defense was special in many ways. Besides all the applause given to me it was also a day to celebrate so much more: a successful supervision, the chances the graduate school offered me and not at last the community of more than a dozen great ArcTrain fellows. Little of the work I did throughout the last three and a half years would have been possible without the advice, funding and friendship I received. So I want to say thank you. Thank you all so very much.”

Congratulations to Georg from the blogging team, we are looking forward to the next eleven defenses!