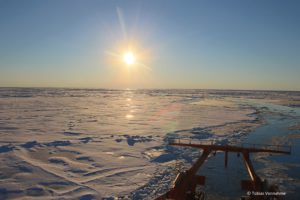 Sailing through the ice

Tromsø, September 8th, 2016: the beginning of a six-week research cruise into the central Arctic Ocean. Our aims: the search for hydrothermal vents and the investigation of a chain of sea mounts. What an exciting task which made me feel curious and nervous at the same time.

I was lucky to participate in a couple of research cruises before and even went to the Arctic Ocean with the very same vessel the year before. However, this cruise was something special for me. At the former cruises I was used to a strict plan of station work that was set early before. So I could easily plan my working times. At this cruise we never knew what we would find next and needed a more flexible station plan. This meant that the working groups needed to be able to react on spontaneous changes in the station plan every time. Occasionally, I even woke up by a call of a nautical officer telling me that we are on station and it is my turn NOW. I must admit that these were not my favorite moments of the cruise since I prefer a more relaxed start of the day.

In the desert of ice

To give every working group some time of rest, we always moved between our two research sites. On the one hand we searched for a hydrothermal vent in the deep Gakkel Ridge, on the other hand we investigated a chain of sea mounts crossing it. After moving daily back and forth between the two sites and spontaneous changes in the plan it happened to me, that I woke up not knowing where exactly I was. Something that does not usually happen to me at home.

My working group – the physical oceanography – worked in both research sites but was busier in finding the hydrothermal vent than investigating the sea mounts. The fluids coming from these vents are relatively warm and rich in trace metals. These fluids rise to a certain depth, where they accumulate and build a plume. To catch this plume and follow it to the vent we used different kinds of sensors. It is similar to pot hitting, the warmer it gets, the closer we are to the vent. 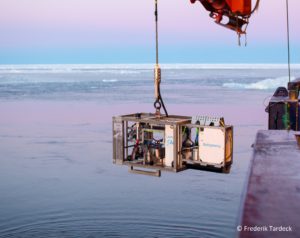 The problem in the ice covered Arctic Ocean is that you can not move freely with the ship while the instruments are in the water. That is why we needed to float with the ice and take the risk not ending up where we wanted. We were really lucky with our measurements and towards the end of the cruise we could limit the area to a few hundred square meters where we expected the vent. Of course we wanted to make pictures of the hydrothermal vent. So we made a lot of drift stations with a camera slide providing high resolution sequences of sea floor images in real-time. Unfortunately we were not that lucky with these drift stations and did not reach the exact position we wanted to. Nevertheless, we saw some smaller vents but must have closely missed the big one responsible for such a huge plume. So, after five weeks at sea we needed to make our way home to Germany without this very last achievement.

Corals in the Arctic Ocean

However, we collected a lot of great data and wonderful images of the sea floor that was surprisingly rich in sponges and other life on top of the sea mounts. For example, we observed a fish from the Atlantic Ocean that was never seen before in the Arctic Ocean. We found new species of copepods and even saw corals in the middle of the Arctic Ocean!

Altogether it was a fantastic experience for me and I hope to have a couple more of those. I am looking forward to the next pot hitting!